The house is at last attracting some real interest from prospective buyers.  Moving house has been likened to Death and Divorce in terms of the amount of stress it engenders.  To me it feels like the end of a relationship.  We grew this house ourselves, starting out as a small weekend escape from busy London lives, via 2 major extensions into a family house designed how we wanted it to work.  All within the constraints of tight rural planning laws as it also sits in a beautiful location with stunning views of the valley and the river.

Money, time and love were all invested in it. 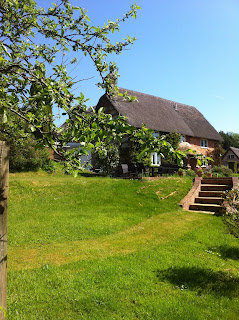 And I took living here for granted. Rather like the way you do with being part of a long-standing relationship.   I always appreciated it of course, it was impossible not to.  But I didn't expect to be moving away from it in the forseeable future.  Until realising that the future is unforseeable, that circumstances would mean we needed to sell it in order to raise money.

And now it is being taken from me, new people are wooing it, going to love it enough to build a new relationship with it.  I am so very jealous of them.  I loved it first.  For nearly 20 years. I will let it go, but it will be one of the hardest things I have ever had to do.
Posted by suzyc at 11:25 1 comment:

My first and only post was about social media, and where I try to position myself in the digital world.   Today I wanted to post a little about a day spent in the real world.

Yesterday was the First of September.  The first day of a shift into a new season, here in the Northern Hemisphere that being Autumn.  Unlike many, as a rule I do not relish this time of year.  I dislike the idea of the light disappearing from our days.  I was a new girl at school too many times for it to ever feel other than nerve-wracking.  I yearned nostalgically for those summer days of freedom as I donned new uniform and braced myself for finding my way physically and mentally in a new situation.  Life seems harsher overall when the temperature drops.  I feel happiest in summer clothes, my arms and legs bare.

Yesterday was however a beautiful day.  The late-summer light was indeed at a mellow angle, the drone of harvesters in the background all too familiar, grounding the sense of time and place even more. I decided to take some time out and act a bit like a child.  There was no-one watching me as I went up to the field and sat on the swing and swung hard for 20 minutes.  I let myself breathe properly for the first time since I can remember.  I bounced on the trampoline.  I rode my bike fast round the lanes.  I ate an ice-cream.  So far so good.

The experience turned out to be cathartic as this relaxing and 'letting go' soon produced floods of tears.  They had clearly been pooling somewhere for a long time because the overspill was dramatic.  I don't wish to appear self-indulgent but the last year, and particularly 6 months have been challenging for me, and by default the family.  I have dealt with the boys going away to boarding school.  I have accepted the need to sell my beloved house.  I have spent numerous hours sorting, de-cluttering and painting this house to ready it for sale.  I have kept it clean and tidy for the many viewings.  I have accepted this needs to be done as we have no money otherwise.  and yet the house has failed to sell and our situation is reaching crisis point.   I also started a job, objectively this is great for me, but juggling my time as a mother  has proved a challenge too.  I am well-aware that I am not on an even keel personally and emotionally.

Yesterday was my first day 'off' in many months.  It felt good to let things go.  It was helpful to feel this way.  I still have a long way to travel with many personal issues which I won't go into here, but yesterday was definitely a starting point for me.

I still can't get enthusiastic about Autumn.  I understand we are good at doing Autumn:  it will largely obey the rules and let us indulge in all those things we do to make it enjoyable: 'the fallen leaves, jumpers and boots and drawn curtains against dark nights...' as a new Twitter friend who is a writer put so beautifully.  I will accept the changing season as always, try to keep my nostalgia in check.  And I will be grateful for a special first day of Autumn 2012, where the shift in the Earth brought some things together for me that I had ignored for previous seasons.
Posted by suzyc at 08:55 2 comments:

You may ask yourself, how did I get here?

I finally took the plunge, I decided to take the next logical step for me in the digital world, and begin a blog.  I am not going to publicise it, I will use it for random musings, a way to order my thoughts, and also as a bit of a discipline to make me write in ways that would be possibly suitable for an audience.

I have kept diaries on and off over the years, intended for my eyes only.  The late-teenage ones I am so pleased to have written and to have kept.  They are cringingly self-indulgent, trite, repetitive and in some ways heart-tugging.  It really was as if I was another person all those years ago.   My relationship struggles with my parents, my school friends, my crushes.  The way I tried to deal with boyfriends, parties, getting drunk. All standard grist to the mill, nothing revolutionary going on with any of it, but it meant a lot to me at the time.  A good reminder for me when I try to make connections with my now teenaged twin boys.  We are never going to think the same way about things.

Moving on several decades, and I was prompted to join Facebook by an email from a friend asking me to be her fb buddy.  This was in 2008.  I was hardly an early-adopter, I had heard of the site, but was unsure about what it could do for me.  I had not bothered with My Space, at one time the only place to be, because I was too busy raising young children to spend any time online apart from researching childraising topics and sending emails.  I felt that it was way out of my league, I had lost touch with new music, and I also thought I was very likely simply 'too old'.

I warmed to Facebook, added friends, tried to be interesting and engaging with my wall posts, and before long I was addicted.  I joined Twitter in May 2009 because I thought I should, but did little with the account at first and certainly did not 'get' it in any great way.  Like many, I have come to prefer Twitter to Facebook, although I think there is a certain elitism to this view.  You have to 'earn' your followers on Twitter by proving yourself out there.  Your followers feel more like a badge of achievement if you like, whereas your Facebook friends tend to be people you know, and people they know.  I can post a lazy or indulgent status update on Facebook, but I think twice before posting anything on Twitter.  I love how big your potential reach can be on Twitter, even without Klout to inform you of your stats, there is a buzz when a post gets several RTs.  Twitter feels more like putting yourself on the line. On Facebook you can just relax.

Joining other networking sites such as FourSquare, GetGlue, Google+ and Instagram have followed.  In the case of some of them I was driven by the desire to be getting in there early, it's true, but I have found them all to have something to offer that is diverting, fun, a source of information and of course all of them waste plenty of time!

Research carried out by Harris Interactive who studied the social networking habits of 2,361 adults showed that 68% of women versus 54% of men regularly used social networking sites.  This would seem to belie the notion that men are more savvy users of technology.  I feel that women have really taken to this form of communication, and use it rather as they would in 'real' life: to chat with their friends, offer support, share information, empathise.  Another study by the Social Tech Review found that on Facebook women have 55% more wall posts than men, although both have the same number of average friends.  Looking at things informally from my own experience, males like to share information and links on subjects of interest: music, film, work, sport etc. rather than commiserating over someone's weight struggle or relationship breakup.  Just like in 'real' life.....

I have seen more of my real-life female friends join Facebook over the past couple of years, but as yet none of them are on Twitter, and I meet with a wall of indifference if I try and explain my enjoyment of the site.  Many still subscribe to the view that it is all about telling the world what you ate for breakfast, or that your head is aching.  Classic Facebook fare that!  So I value my female Twitter followers even more because I know we all share a certain way of thinking.  My follower list is tiny, but I have some class ones there, and that to me is more important.  And it is slowly building as I engage more and understand more what the value of Twitter really is.

Anyway, my logical way forward was to start blogging, and here it is.  I didn't know where to begin, but the best way to learn is just to get on with it. I have yet to customise or link it in any way, but I plan to have fun with it.  It's a new and interesting challenge. So apologies for the lack of bio, cool images and happening links, but they are all to come in the future.
Posted by suzyc at 12:16 2 comments: